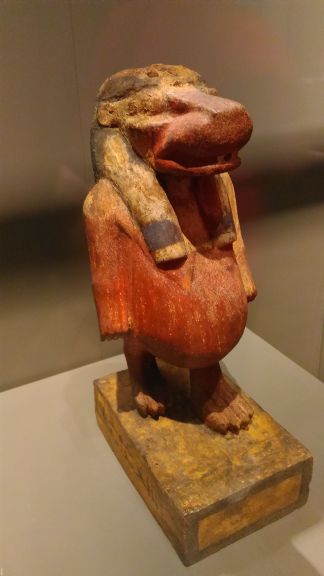 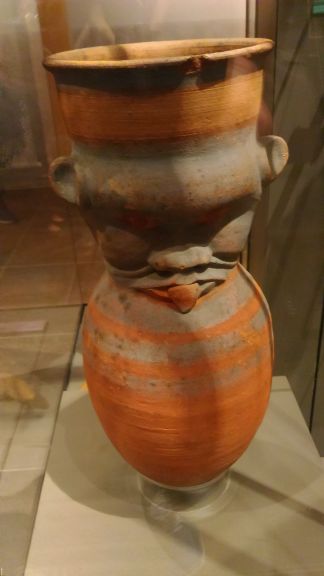 Having children is a serious matter,
you end up worrying more about them
than yourself.

It was so for the old Egyptians
as it is for us now: they had their gods
who’d provide.

O Taweret, hippo with a lion’s paws
and a crocodile’s tail, protect my child,
let her live.

Bes, who art as wise as thou art ugly,
grinning hairy dwarf, guard my child’s milk from
bad demons.

Whoever you are now, modern household gods,
whatever shape and form you may take on,
help my child.

Today’s prompt from napowrimo.net: “write a poem that engages with a strange and fascinating fact. It could be an odd piece of history, an unusual bit of art trivia, or something just plain weird.”
The pictures show a statuette and a pot representing the ancient Egyptian gods Taweret and Bes, two exhibits I photographed at Turin’s Egyptian Museum on April 30, 2018.

Sunday in town, everything — everyone — is slower
time is slower, clouds are and raindrops,
and the mere perception of colours
seems slower: what do you call
the opposite of fading?

Faster or slower, black or white or grey,
or any imaginable, plain or metallic hue ,
designed for the few or for the masses,
fruit of the labour of those who made
this city and saw it grow,

citizens in their own right, revered
and celebrated by poets or copywriters,
part of the nation’s collective memory,
symbol of this or that, pride of sports fans,
eternised in a museum.

Today’s prompt from napowrimo.net: “write a poem based on the Plath Poetry Project’s calendar. Simply pick a poem from the calendar, and then write a poem that responds or engages with your chosen Plath poem in some way.”

I picked “Child” — January 28, 1963 — that’s about 6 months before I was born. The prompt on the Plath project page said: “Not only is “Little.” the only one-word line of this piece, it appears at the near-center of the poem, like a fulcrum or hub. If you were to build your poem from the inside out, what would you place at its center?” 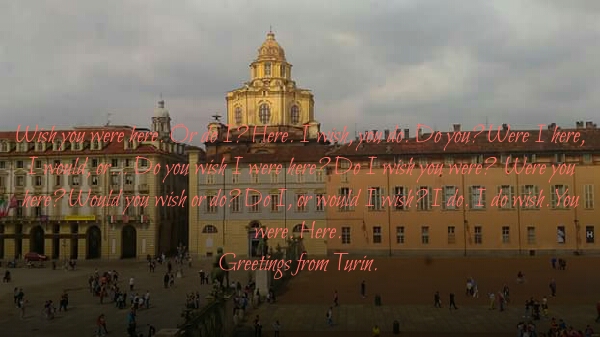 Today, the daily prompt from napowrimo.net suggested one could “draft a prose poem in the form/style of a postcard”
I am actually on holiday in Turin with family and friends, so here is my postcard. 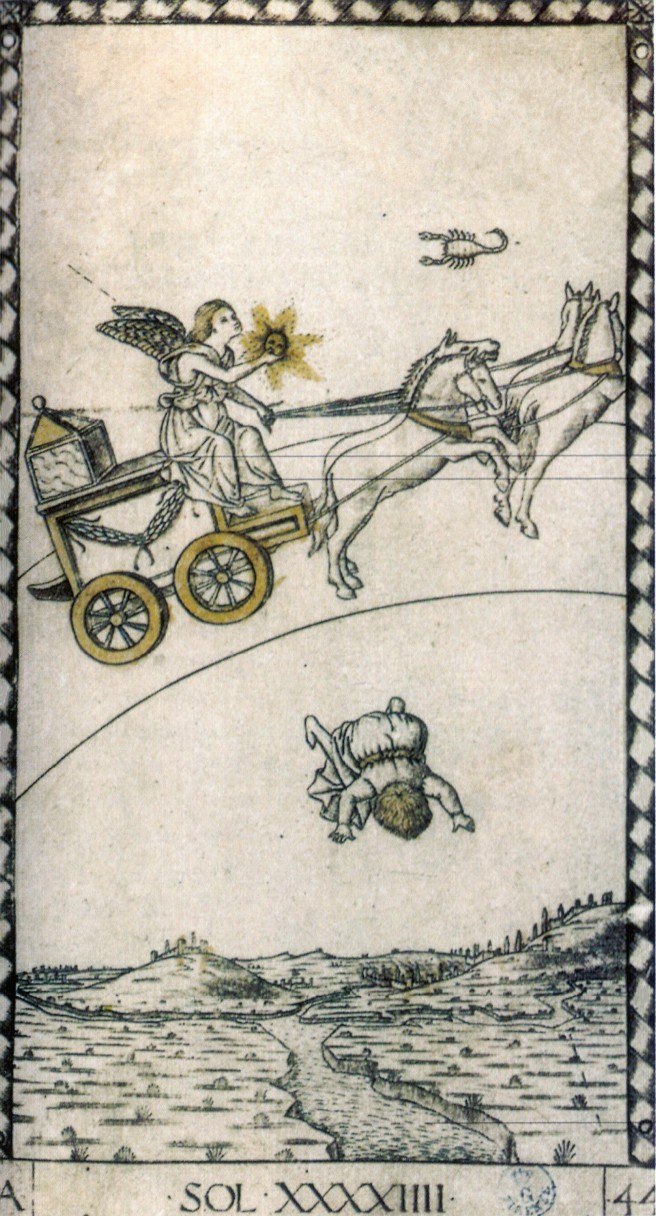 OCTOBER 31, 2018: this poem found its place in Peach Velvet magazine’s Fall 18 issue, a special Hallozine — The Poet’s Tarot. You can read it, and buy a copy of the magazine, at this link.

APRIL 27, 2018: Today’s prompt from napowrimo.net: “Following Lauren Hunter’s practice of relying on tarot cards to generate ideas for poems, we challenge you to pick a card (any card) from this online guide to the tarot, and then to write a poem inspired either by the card or by the images or ideas that are associated with it.”
I actually chose a card from the so-called Mantegna tarot cards, a set of 15th-century engravings for tarot cards attributed to Andrea Mantegna until the 19th century: The Sun, Card no. 44 from the E-series, which is the property of Florence’s Uffizi Gallery, Gabinetto disegni e stampe (I found this public domain picture on Wikimedia Commons.)
First of all, tarot cards make me think of Madame Sosostris, the clairvoyante in T.S. Eliot’s The Waste Land.
But the original Italian word tarocco (tuh-ROCK-kaw) is what I chose to play with, as it has more meanings: a tarot card; some cheap – usually illegal – imitation of, say, some product designed by a fashion designer; or a certain variety of Sicilian red oranges.

so smooth and delicate
under my fingers,
despite your sharp contour

so rough, slightly acrid
to my tongue and nose,
though you’re my favourite food

your rustling and crinkling
keeps me awake all
night, like only books can

Today’s prompt from napowrimo.net: “write a poem that includes images that engage all five senses.” 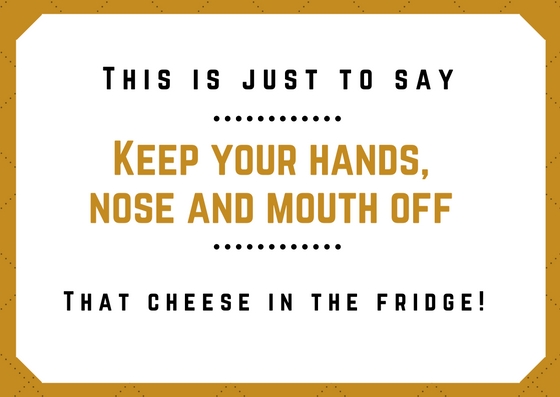 This is just to say
keep your hands, nose and mouth off
that cheese in the fridge!

Today’s napowrimo.net prompt: “write a poem that takes the form of a warning label . . . for yourself!”

plowing into people
indiscriminately
one by one, one by one

including a child’s stroller

this time appeared to be different

a scene of horror

from a dollar store

please come and write how you’re feeling
If you can’t write in English
write in Chinese, write in Korean

the Toronto Maple Leafs
were playing Boston
in a playoff game

Today’s napowrimo.net prompt says: “write an elegy – a poem typically written in honor or memory of someone dead. But we’d like to challenge you to write an elegy that has a hopefulness to it.” I actually wrote sort of an elegy in my poem for April 17, remembering my mother, and an elegiac poem I wrote on my father appeared on Silver Birch Press’s blog some time ago (you can find it here.) Though I love both W.H. Auden and W.B. Yeats, and I love the former’s elegy for the latter, an inspiring reading suggested in napowrimo.net’s link, I would not be able to write in an elegiac tone about someone I have not met and known in person. But yesterday something terrible happened that touched me like millions of other people in the world, so I decided to dedicate my elegy to the innocent victims of the dreadful attack in Toronto of April 23, 2018 – it is actually a “found” elegy, a found poem sourced from an article in the New York Times: extracts from the text adapted very naturally to my idea for the poem, even concluding with a hint of hopefulness. Here’s the article: Ian Austen and Liam Stack, Toronto Van Driver Kills at Least 10 People in ‘Pure Carnage’ – The New York Times, online edition (accessed April 24, 2018.)

When shall we three meet again?
It’s always such a pleasure to spend time
with your best pals in front of a good pint,
it’s just a shame we meet so seldom now,
we should do this more often from now on.

What light through yonder window breaks?
Oh, no, my neighbour’s at it yet again!
He’s drunk and now he cannot find his keys,
I’m sick of being blinded by his torch,
the noise he makes is getting on my nerves!

What dreams may come in that sleep of death?
I saw him only yesterday, alive
and kicking, watching football on TV…
Poor Dignam, what did you do to deserve
that final stroke before they scored and won?

If you wrong us, shall we not revenge?
Can you at least park decently next time?
Your old clunker’s a mess, a pile of rust,
and regularly stationed right beside
my gate! You’re warned: I’m not a saint like Job!

Shall I compare thee to a summer’s day?
Yes, yes! You should have been there, heard them talk!
She was blushing, and she hung on his lips,
he told her she was all the world to him –
never mentioning his wife or his kids…

Today’s prompt from napowrimo.net was confused and confusing as never before – should it be “based [on] sound?” Or about poetry sounding like the spoken language? Or about song lyrics, or – why not, at this point? – what sounds like “local clichés?” (O no, not another one with idioms, proverbs, and clichés!) The way I interpreted it, one was meant to incorporate bits of conversation, and quotations, and chit-chat into a poem, a bit like T.S. Eliot did in the pub scene of The Waste Land (which reminds me: “Hurry up, please, it’s time!” – it’s taken me all day to come up with a few lines…)
Anyway, here it is: “a poem based in sound. The poem, for example, could incorporate overheard language. Perhaps it could incorporate a song lyric in some way, or language from something often heard spoken aloud (a prayer, a pledge, the Girl Scout motto). Or you could use a regional or local phrase from your hometown that you don’t hear elsewhere[.]”
Well, it’s the 23rd of April, by St. George and the mighty dragon he slayed, it’s Shakespeare’s birthday today, so how could I avoid a(n albeit minimal) celebration?

The sun can’t rise
in the West: that’s what they
would say in Japan.

Yet, every morning it rises in Europe,
and in America, too: East and West Coast.

A circle can’t have
corners: in theory, at least,
but of course it can.

Draw a nice circle on a piece of paper;
cut it out, fold it in two: here’s your corner!

Pigs can’t fly, that’s what
a gossipy little bird
told me in the sty.

But I know a man who flew a fat pig
on his private jet, and no one said aught.

The clock can’t strike thir-
teen, or so they say – a most
old-fashioned idiom.

What if I have an electronic clock and
programme it to strike from one to twenty-four?

The stars cannot re-
arrange themselves in the sky.
What of that? Tough one…

They certainly can in Romeo’s conceit
about the stars and Juliet’s brighter eyes.

Last, a mouse can’t eat
an elephant: well, not all
at once, I would say.

Try locking the mouse in for a month or so,
with nothing else to eat but a pachyderm…

Nature will always
have its way with men – still, men
will try to prevail.

Today’s prompt from napowrimo.net: “take one of the following statements of something impossible, and then write a poem in which the impossible thing happens: The sun can’t rise in the west. A circle can’t have corners. Pigs can’t fly. The clock can’t strike thirteen. The stars cannot rearrange themselves in the sky. A mouse can’t eat an elephant.”

In the breeze, by the lake,
my friends and I were dancing
oh, so gaily! All at once,
that poet appeared,
with his sister. They saw us,
and we saw them. I knew then
something had happened:
I saw myself reflected
In their eyes, and my beauty
was forced to leave me.

I would soon fade and wither,
but my beauty would stay on,
live in their recollections
and be sung in poems,
become a symbol
of the joy of spring.

Today’s prompt from napowrimo.net suggests writing something related to the myth of Narcissus.